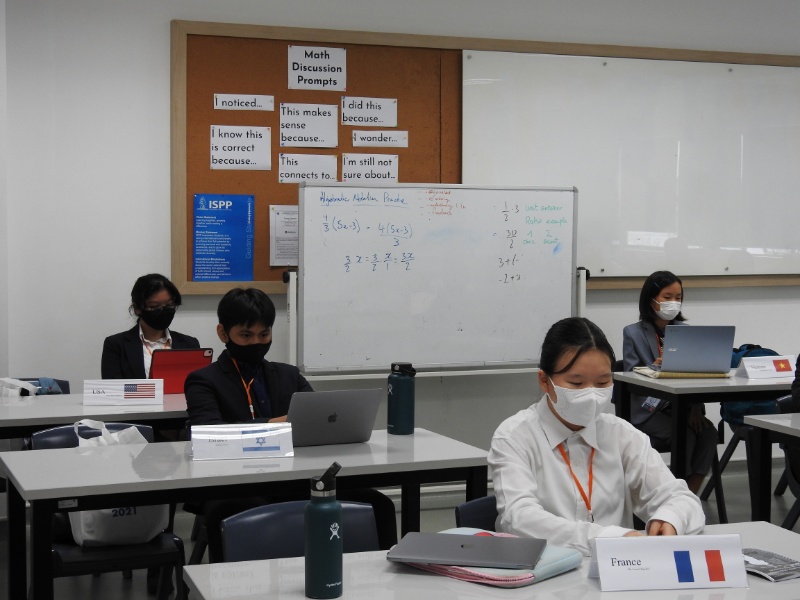 MUN or Model United Nations is an extra-curricular activity in which students are assigned a country to research and simulate UN committees.  This past weekend CIS joined six other schools at ISPP for their 10th annual MUN conference, “New Challenges, New Chances”.Pre-Conference PreparationOur MUN team consists of 20 students from grades 6-10 who have worked tirelessly over the last three months researching their country and learning the rules of procedure.  The Secretary-General of this conference, a student from ISPP,  assigned our delegates to countries such as Norway, Vietnam, Myanmar, Saudi Arabia, Australia, and Indonesia. Students then had six weeks to prepare opening statements, research their countries policies, find out who is allies with whom, and how to write policy statements and resolutions. The CIS Model UN Teams competing at a MUN Conference – Dec 2021ISPP 10th Annual MUN ConferenceUpon arrival we were welcomed with goodie bags with t-shirts, mugs, masks, and notebooks and took pictures together as a school before dividing into our specific committees. For the duration of the conference to maintain COVID safety regulations, the committees stayed together and opening and closing ceremonies were viewed live via Zoom. We had the privilege of listening to the head of ISPP, the directors of their MUN team, and the student organizers of the conference talk about their experiences of MUN through the years and how the conference would work. The Juniors were divided into two General Assemblies debating issues such as the vaccination rollout, endangered species, and child labour.  The Seniors were assigned places in the Security Council, Economic and Social Council, and the General Assembly debating the precarious situations in Myanmar and Yemen. A big thank you to ISPP for hosting this conference in a safe and meaningful way, it was so much fun to get together with other schools after almost two years and form new relationships. MUN requires time, dedication, and a desire to learn more about the policies of different countries and how the UN works.  The CIS students made their directors and the CIS community very proud!Learn more about the Model UN at CIS.